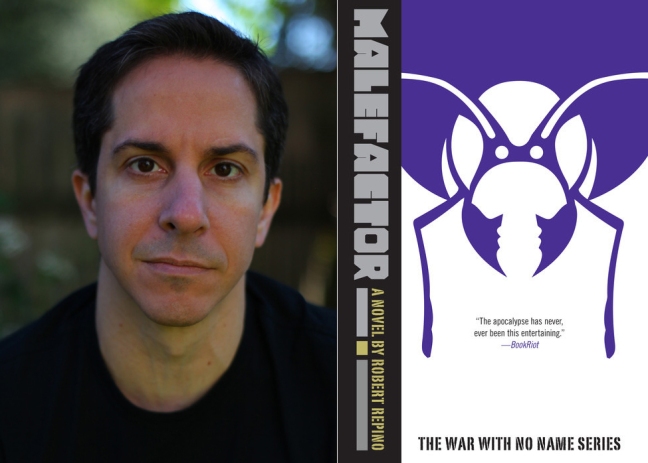 In Robert Repino’s The War With No Name series, the near-extermination of a dominant minority, ruling and ruining the planet – humans – is a rather warm and welcome event. Repino manages, through great writing, to tread a careful line between grounded, character-driven, mythic action and philosophical satire as house pets and wild animals are uplifted by an ancient intelligent race of ants, led by a vengeful Queen.  Everything about these books is unusual, especially Repino’s demonstrated ability to pull this off.  He’s crafted a ripping yarn that is also a thought-provoking allegory.  In Malefactor, the finale of the series, he caps it all off by focusing on character swe can get emotional about and the sort of science-fiction visions that immerse the reader in worlds that inform how you see what’s around but are sumptuously imaginative.

As the novel begins, the world is (unlike ours) falling together, not apart.  What remains of humanity has made peace with the newly-empowered and intelligent animals.  But vengeance is the gift that keeps on, and together is threatened by the Mudfoot, wolves that have risen from the polluted remains of the previous rulers (us).  It’s both the product of a wildly inventive imagination (Repino) and a funhouse mirror aimed at today.  Making all this work and really sing are Repino’s gift for characters we really love to read about, be they singing beavers or morose warrior house cats.  Every change of scene puts readers into delightful company, some familiar, some surfacing as everything ends and begins again.

Repino also has a knack for writing large arcs, weaving longer and shorter stories together in the manner of Stephen King, JRR Tolkien and Frank Herbert.  Happily, he knows how to keep battle fatigue at bay.  Sure, he crafts those big-scale scenes of action, but he knows when to let go as well.  And he finds a lot of variety in his newly-powerful Animal Kingdom.  Reading these books manages to be a fine definition of serious fun. He’s an expert miner of the cognitive dissonance between the reality he creates and the reality within which the books are being read.  It turns out that The War With No Name knows when to go big and when to stay small.

Malefactor is exactly the kind of finale any well-done series might hope for.  It’s a big, thought-inspiring mental meal and a hair-raising roller coaster.  It’s satisfying enough to leave you happy and fulfilled, and good enough to make you wonder and hope what else can happen in this world?

The animal who wrote this review talked with the critter who wrote the books, and recorded the sounds for you to hear via this link; or, sharpen your claws while you give an ear to the embedded audio below.