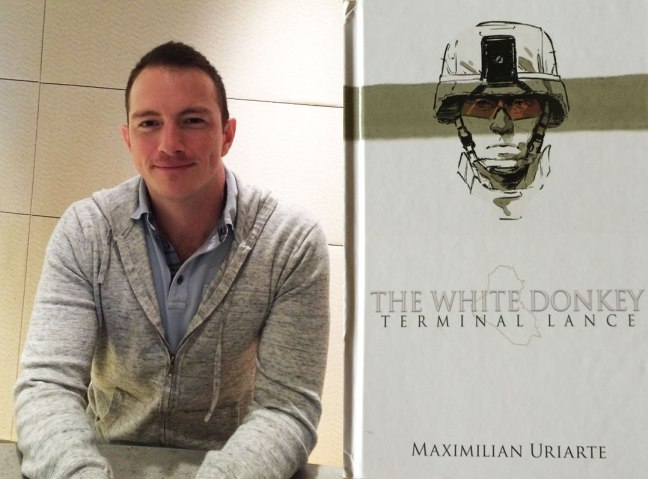 For Abe Belatzeko, the Iraq war offers more bureaucracy and boredom than fierce firefights. He pairs up with Jesus Garcia, and their journey from strangers in a strange land to friends proves to be a powerful narrative arc for The White Donkey, the graphic novel from the creator of the webcomic Terminal Lance. Readers of the comic will already know them; readers of the novel will never forget them.

Maximilian Uriarte’s The White Donkey is a palpable reminder of how text and art can craft an unspoken, and in a sense, indescribable narrative power. Story is king here, but it lives almost entirely behind the words and images. Both words and imagery are deliberately spare, creating a sense of space and cognitive dissonance. In The White Donkey, war is both boring and terrifying, it’s unreal and uncanny. War is weird. 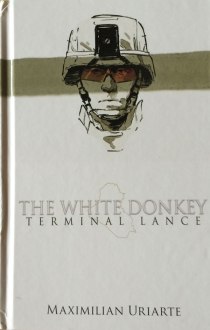 To a degree not much happens in The White Donkey, and the result is that the intensity with which the narrative grips you and the speed with which you read are both a bit uncanny as well. That said, the boys, and they are boys in that they are in no way grown up, show up and go through some rigorous, but not brain-bending training. Then out to wait here, do some pointless task there, and then flip out [with good reason] when a shot is fired.

But they change. And there are changes that might be undone and those that cannot be undone. And in the midst of it all, the world intrudes in the form of animals. The 29 Palms camp, which itself is ugly and infamous, is almost haunted by coyotes. They are both scavengers and messengers in the way that dreams are both scavengers and messengers. And the white donkey is even more powerful. But Uriarte knows well the power of ambiguity, and lets his audience make the journey into their own spirit world. This is a war where our conscience is our guide. Maybe we should try that more often.

The White Donkey is a pretty odd and quiet book about a war that we’ve managed to keep on the back burner. How could that happen? A war on the back burner? There’s a level of satire to be found in this novel, a grim, dry humor that ensures the story is never bogged down in “overfeel.”

Uriarte does not show us. He does not tell us. Instead, he’s crafted a graphic novel that offers us simulacrum of the experience. The narrative undertow of The White Donkey really does pull us, but not down. We rise to the surface to breathe. We look around, and find the world we created. It may not be what we intended. But having experienced the narrative with which it was forged, we can at least hope to understand that while it may never be ideal, it will always be malleable.

Maximilian Uriarte is, not surprisingly, charming, outgoing and very story-centric. I was intrigue and happy to hear early on in our interview about the import of the narrative arc in The White Donkey. While we managed to discuss a lot of his techniques, his themes and his ideas in the book, the core content, as it were, remains pretty pristine. We discussed out of context, a couple of scenes, but kept the story elements well out of the chat.

We did talk about Terminal Lance, as well as the novel. I do think anyone who wants to create a webcomic or graphic novel, or is interested in how story works in the abstract, will find a lot to like here.

Start out with the lightning round conversation, which you can download by following this link to the MP3 file. Or just listen here:

Of course you will want to hear this fascinating young man in-depth, and you can follow this link to download the audio file. Or, if your job involves long stretches of doing nothing (and most do), you can listen right here and right now.

This book is super! Set in a re-imagined medieval Europe, brilliantly written, it’s highly intelligent, astonishingly engaging.  No matter what sort of genre you think you like, you LOVE this book.  Guy Gavriel Kay is on tour, so look to the bookstores near you to see if he’s in town.  #WYVRT #RKBOTD