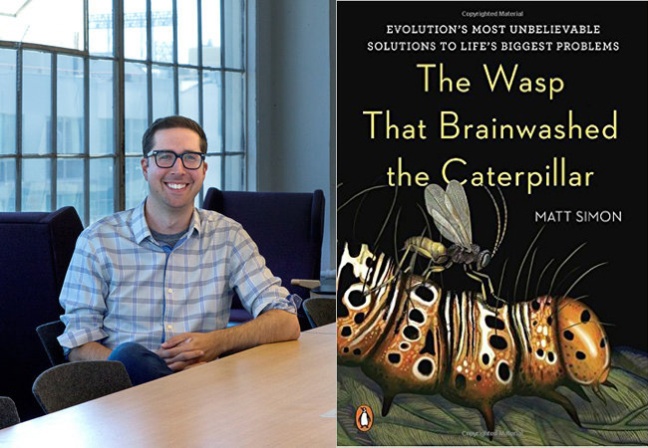 Evolution is a process that is by definition invisible – it happens too slowly. It’s not just the speed though, it’s the results, all around, that seem, well, underwhelming. Evolution does what works, which is generally unspectacular. Except in those species when it is forced to some extreme, in which case, evolution’s shovel-ready face is made plain. Matt Simon is your man so far as evolution’s extremes go. His book The Wasp That Brainwashed the Caterpillar: Evolution’s Most Unbelievable Solutions to Life’s Biggest Problems is engaging, fun to read, well and thoroughly illustrated. It’s non-fiction horror at its best.

Each section of the book offers up stories and illustrations of critters that have come to an unusual and generally creepy evolutionary solution to the usual problems; feeding, avoiding being fed upon, mating, protecting your young – all the things humans do, but we generally do them in (what we, at least, consider to be) a more straightforward manner. While some of these weekday monsters might be known to readers, for example the Angelerfish, or the, uh… wow these are all freaking weird! And generally under-advertised, so to speak. All the better to creep you out and fill you with wonder.

The one-two punch of great prose writing and great illustrations should sell this book to all but the most weird-averse readers. Simon is a great presence. He has a low-key sense of humor that is always kept in perfect check. He knows how to tweeze the reader’s distress-level with an alarming ease. Each critter is covered in just the right length of verbiage. He’ll digress on occasion, but is always on point. It’s like having the great fortune to accidentally run into the most interesting person at the party.

The illustrations are a key part of the book’s power. Vladimir Stankovic’s work is beautifully drawn even when he is showing us something truly unpleasant, like the Tongue-Eating Isopod. It’s conceptually horrific, explained in dismaying detail by the ever-cheerful Simon, and as drawn by Stankovic, both cute and creepy. That is not a target that is easily conceived of, and these two bull’s eye the hell out of it in this book. It’s really fun, so much so that you may not realize that your consciousness is being colonized by Simon’s take on evolution.

Moreover, on a sheer readability scale, The Wasp That Brainwashed the Caterpillar: Evolution’s Most Unbelievable Solutions to Life’s Biggest Problems is most likely an 11. It’s impossible not to pick this up and peruse through it to the degree where it will give even the Internet a run for its money on your attention. And rest – or unrest, as the case may be – assured that you will hit the Internet afterwards, to find out more. It’s possible this book itself may be an argument for evolution. The Wasp That Brainwashed the Caterpillar is in some ways a precursor of the literary world to come. Which is to say that they haven’t killed off the book yet, though they may have tried. Instead, they made it stronger.

Hear my lightning round interview with Matt Simon by following this link, or listening below.

Or go for survival of the fittest with the in-depth conversation by following this link or listening below.