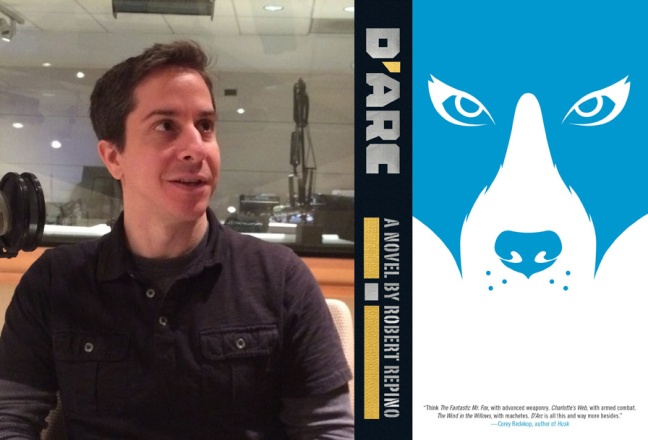 We expect a lot from our entertainment. We want to be thrilled beyond belief by the new expanses we’re shown, even as our own inner lives are being illuminated. That’s a tall order, but look no father than D’Arc by Robert Repino. It’s the second novel, after Mort(e), in what Repino is calling The War With No Name series. He’s also published an excellent novella from this world, Culdesac.

In Mort(e), Repino quickly brought about the end of humanity’s rule on earth by virtue of the Ancient Ant Queen, a hyper-intelligent, almost god-like being that decides to eliminate humans. Not only does she create “THEM!”-like giant ants, she also “uplifts” the other species; dogs, cats, beaver, and more – so that they can walk upright, carry weapons and go on to make all the mistakes we’ve made. It is a come-uppance of Biblical proportions. Mort(e) was once Sebastian the house cat, neutered and de-clawed. His best friend was the neighbor’s dog, Sheba, a recent upliftee who has not taken a new name. 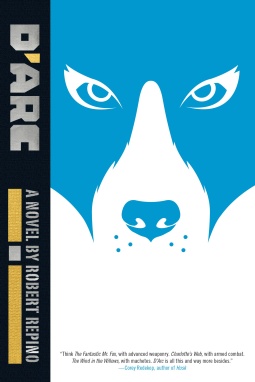 As D’Arc begins, Mort(e) and Sheba have managed to eke out a relatively stable life on the frontier. In a remote cabin, they raise the giant warrior ants, and try to recover from the war. But Mort(e) is a legendary figure and the events set in motion by the Queen are not yet done. A new race of intelligent monsters is creating a civilization under water, but they’re looking to the land. A city of beavers finds it is being threatened by a giant monster and there’s a serial killer foot in the tinderbox capital where all animals try to get along with one another and humans.

By virtue of great writing, Repino makes crafts the characters here with a significant emotional wallop. Mort(e) is a flinty-eyed veteran, wary of immersing himself in the violence at which he so excels. He’s filled with a gruff love for Sheba, even as we the readers know she can never feel the same. Sheba is complicated and beautifully crafted, as are Fallkirk (a heroic husky), and the beavers, WOW – the beavers. Repino’s world building matches his character insights, which are stellar. Pretty early on, you’ll encounter a scene in the beavers’ city that is every bit as memorable as your first sighting of a sandworm on Dune. The good news is that it gets even better.

Repino creates a race of aquatic monstrosities who are sympathetic even as though they plan to kill all humans most of the animals. The Sarcops, as they call themselves, are highly intelligent and as ruthless as humans. Credit must go Repino’s amazing imagination then, that the novel includes an airship battle so thrilling it’s likely to push away any movie memories you might hope to store. Repino not only blocks that action like a pro, keeping our eyes on a variety of battlefronts, he also syncs up the character arcs with the action. It’s an emotional and excitement reading high of a magnitude you don’t generally find between the pages.

D’Arc also masters the other challenge of any book that is part of a series, which is to provide an ending that feels right, but does not actually, as it were, end. And while you’ll certainly be looking forward to more exploration of Repino’s world, this is a book that you will playing the best bits of, in fact all of, on the big screen in your mind. If you have high expectations of your entertainment, if you want to see something new and feel something human, then Robert Repino’s The War With No Name books offer you no less than the best you can hope to find. 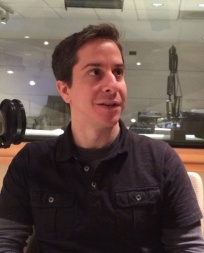 What makes Robert Repino so much fun to talk to is how much fun he is clearly having writing The War With No Name books. And believe me, you will have fun as well! Repino is an outlier. He’s a literary school graduate who does not come to genre through conventions and magazines and short story writing. He even confesses a bit of embarrassment at not having a kitchen window epiphany novel to his name. I think his freedom from the usual genre associations works well for his writing, and his publisher Soho, not known for SF, deserves a lot of love for taking on this work. We tried to keep matters spoiler free, beyond, “That was a helluva scene.” Jump into the world you deserve by following this link, or just listen below and the Ant Queen will do all the deciding.